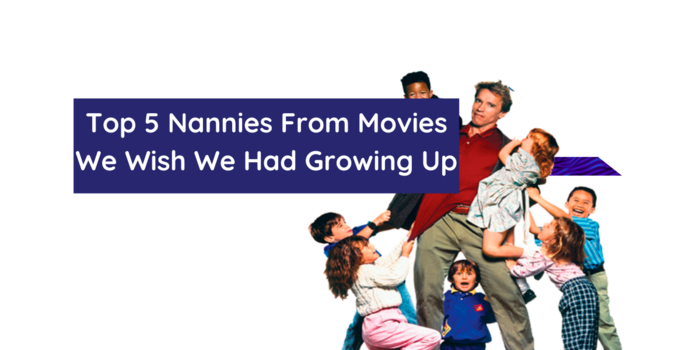 We all grew up watching nannies movies where they become the second parents and tutoring wards to a diverse group of children.

From Mary Poppins to Mrs Doubtfire, each character left a mark and an important life lesson in every viewer.

Nannies, (and sometimes governesses and babysitters), have been the focus of many films across multiple decades. Whether their character is sweet or a little bit in-way-over-their-head, nannies add delight to the lives of the children they care for. So we have assembled a list of our Top 5 most memorable nanny characters! We wish these nannies had taken care of us growing up!

And if you have time in your nanny job or governess job - we highly recommend watching all of these movies with your charges. They might just learn a thing or two!

In 5th place - Mary Poppins! Poppins is one of the most famous nannies, known all over the world. Played by Dame Julie Andrews, this lavish and modern governess employs the power of music and the wonders that come with adventure to mend the relationship between two young children and their father.

The film produced catchy tunes such as “Spoon Full of Sugar” and “Supercalifragilisticexpialidocious.” Its impact, which was partly due to its groundbreaking mix of live acting and animation, won it five Academy Awards! It was also selected for preservation at the Library of Congress in America.

In 2018, Disney produced a sequel that captured the magic and spirit of the original film. Mary Poppins Returns stars Emily Blunt, Lin-Manuel Miranda, and Ben Wishaw.

An international favourite in 4th place - Mrs Doubtfire! The 1993 blockbuster remains one of the best characters that the late-Robin Williams brought to life. The story introduces a divorced father who disguises himself as an old, female babysitter and nanny so he can spend time with his children, held in custody by his former wife.

The comedy film tackles the emotions and reality of families going through a divorce. Mrs. Doubtfire emphasizes the importance of acceptance and warmth despite going through hard times and there are valuable lessons throughout the movie.

In at 3 - it's Nanny McPhee! Based on Nurse Matilda by Christianna Brand, Nanny McPhee is another famous magic-wielding governess tasked with bringing a dysfunctional family back together. The film gives importance to developing a deep connection with the viewers, and stoking emotions while imparting valuable life lessons.

Many praised the film for portraying kids as children behave in real life. Dame Emma Thompson returned to play the ageless and calm McPhee in a hit 2010 sequel, Nanny McPhee Returns. Kids will love this hilarious film so be sure to watch it together.

An all time great and yet another classic performance from Dame Julie Andrews in at number 2! The Sound of Music continues to resonate 45 years after its release. The movie revolves around the life of an Austrian postulant nanny, Maria, who is tasked with caring for the seven Von Trapp children and bringing music back into their lives.

The Sound of Music is one of the greatest movie musicals ever made. The film inspired a Broadway production of the same plot and title. The original stage play first ran on November 16, 1959, and had sold nearly 1,500 performances.

In first place - we would choose The Nanny Diaries' Annie Braddock to be our nanny growing up! Braddock is a fresh college graduate who was mistakenly hired as the nanny of 5-year-old Grayer X. The little boy, who comes from an influential Manhattan family, is spoiled and sad but redeemable.

The movie introduces the characters as research papers would introduce reports. Annie the Nanny begins to see the X family as figures in dioramas most often seen in museums. On the other hand, the Xs keep a “Nannycam” inside a teddy bear that they use to watch their new babysitter’s activities.

While The Nanny Diaries does not have magic and songs, it perfectly portrays how class warfare works out in modern society. We found it easy to relate to for children in this society!