7 Top Languages Nannies and Tutors Should Teach Their Charges 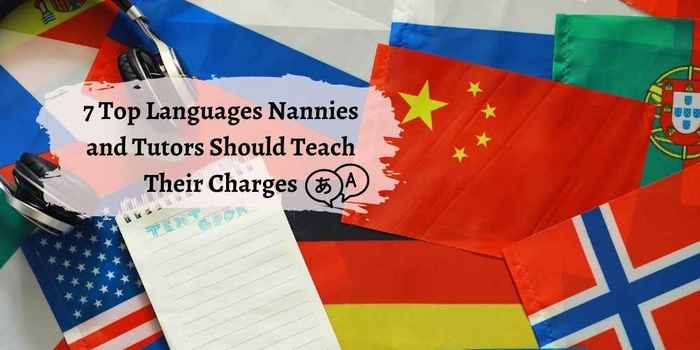 The demand for language skills has seen a definite upward trend in recent years. Knowledge of a foreign language is now ranked eighth among the most sought-after skills in the corporate world. Research studies have also found that bilinguals and multi-lingual have received significantly more job opportunities since 2010.

Learning a second language at an early age promotes healthy development in children. It also helps them gain cognitive and social skills that they can use throughout their lives. As nannies, governesses, and tutors, it is crucial to understand what benefits a second language offers our charges and how we can maximise them.

Advantages of Learning a Second Language

Connection: Giving your charges the ability to communicate with people from other communities is an incredible human experience. Having the opportunity to connect with different people using their languages open up young kids to new concepts, cultures, and traditions.

Academic Advantage: Children proficient in other languages are generally better at reading, writing, and solving math problems than those without a second language.

Learning Capabilities: Teaching children a second language helps improve their communication skills, making it easier for them to pick up additional languages.

Best Languages For Children to Learn

This charming Latin language is famous for its romantic lilt and is one of the most widely spoken languages in the world. According to Kumon, there are over 65 million French people and more than 72 million bilinguals across the globe. The language is spoken in parts of Canada and in a number of African countries.

Mandarin provides children a look into one of the world’s oldest civilisations. This language has over 1.3 billion speakers across the planet, making it the most spoken in the world.

The language has four different tones that make each character sound like a song. The written characters also resemble pictures that appeal to younger children who take more to visuals.

While this language is not as widely used in a corporate setting, Spanish has the second-most native global speakers. It is the main language used to communicate in most Latin American countries and in parts of the African region.

Knowing Spanish makes it much easier for children to pick up other Latin languages, including Portuguese, French, and Italian.

There are over 100 million people that speak German. While it is not a widely spoken language, it remains one of the most important in Europe, partly due to the country’s economic force.

Nannies whose charges often travel to Austria and Switzerland would greatly benefit from learning German.

Italian is one of the top five languages studied in colleges in the United States. The Italians have heavily influenced the world’s history. Many cultures, especially Australian and European, have been taken inspiration from the Italians. It is reflected in their food, literature, and commerce.

The Japanese culture has had a great impact on the culture and commerce of almost every country in the world. With over 130 million speakers, almost every nation is familiar with the aspects of Japanese traditions.

Millions of tourists flock to Japan every year to enjoy their festivities and their unique animations, which is known to the rest of the world as “anime.”

There are a lot of education shows fit for young charges. Click here to find out the best.